When by an edict of the sovereign powers
the Poet enters this indifferent world,
his mother, spurred to blasphemy by shame,
clenches her fists and condols God:
Why not have given me a brood of snakes
rather than make me rear this laughing-stock?
I curse the paltry pleasures of the night
on which my womb conceived my punishment!
Since I am chosen out of all my sex
to bring this scandal to my bed and board,
and since I cannot toss the stunted freak,
as if he was a love-letter, into fire,
at least I can transfer Your hate to him,
the instrument of all Your Godly wickedness,
and so torment this miserable tree
that not one of its blighted buds will grow!'
Choking on her enmity, and blind
to operations of her eternal plan,
she readies in a Gehenna of her own
the torture-chamber of a mother's crimes.
Yet under an Angel's unseen tutelage
the outcast child, enchanted by the sun,
will recognize in all he eats and drinks
golden ambrosia and nectar of gods.
With wind for playmate and with clouds for nurse,
he sings the very stations of his cross -
the Spirit who attends his pilgrimage
weeps to see him happy as a bird.
Those he longs to love give him wide berth,
or, since he offers no resistance, vie
to be the first to make him moan with pain,
testing their violence, one after the next.
Fouling the food that he is meant to taste,
they spit in his wine, mix ashes in his bread,
whatever he touches they declare unclean
and claim they fear to walk where he has been.
Meanwhile his wife, in public places, cries:
Since he believes me worthy to adore,
I'll deal in worship as old idols did
and, like them, have myself touched up with gold;
why not? I'll glut myself with frankincense
and genuflections, gifts of meat and wine-
we'll see if in so reverent a heart
my smile usurps the honor of the gods!
And when I weary of these impious tricks
the time will come for a laying-on of hands:
these frail and adamant hands, these harpies' nails
will claw their way into his waiting breast;
as if a sparrow trembled in my fist
I'll tear his beating heart out of his flesh
and toss it underfoot disdainfully
to make a mouthful for my favorite pet!'
To Heaven where he sees a splendid throne
the oblivious Poet lifts his pious hands,
and blindly flashes out his intellect
not noticing the angry mob:
Thanks be to God, Who gives us suffering
as sacred remedy for all our sins,
the best and purest essence which prepares
the strong in spirit for divine delights!
I know the Poet has a place apart
among the holy legions' blessed ranks;
You will invite him to the eternal feast
of Dominations, Virtues, Thrones and Powers:
I know that pain is the one nobility
upon which Hell itself cannot encroach;
that if I am to weave my mystic crown
I must braid into it all time, all space. . .
But even the lost gems of ancient Palmyra,
metals sunk in the earth, pearls in the sea,
set by Your hand, could not approximate
the brightness of this perfect diadem!
For it will be made of nothing but pure light
drawn from the hallowed hearth of primal rays,
of which our mortal eyes, for all their might,
are only a mournful mirror, a darkened glass.' 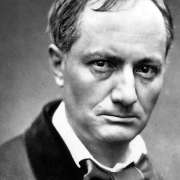